Hourly comics....
Harder than you would think...
Fun as shit though.... 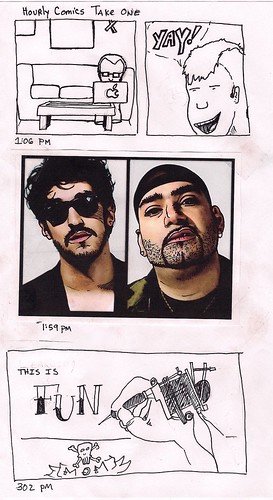 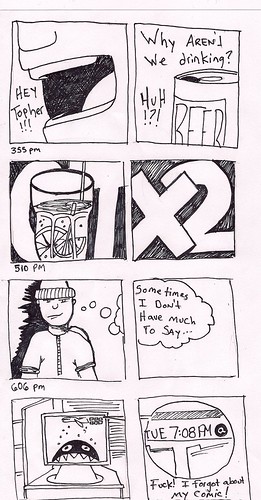 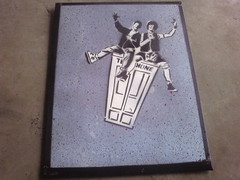 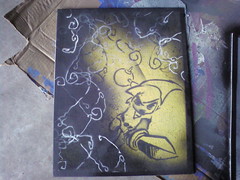 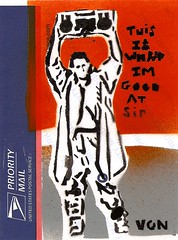 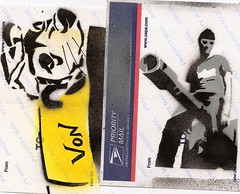 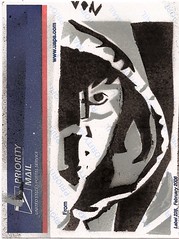 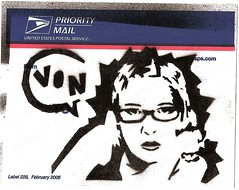 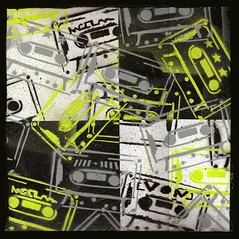 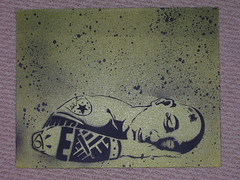 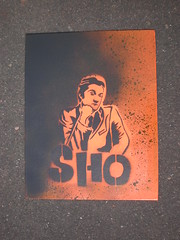 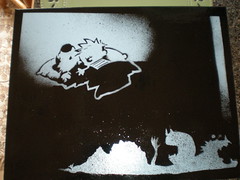 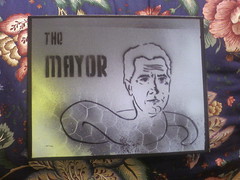 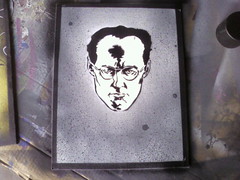 I'm really freakin' tired right now, but I just can't sleep. I loathe allergies. 2 big things cleared up in me and Scuffs lives. I sorted out m roommate siuation and Stump is not leaving YPI. This is huge, but seems so little when I'm just typing it out. Let's just hope these things can stay stable.

I gave Scuffy a new tattoo that I am proud of... 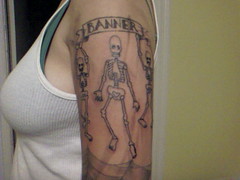 My birthday is comming up in a few weeks (August 31st) I don't know what to do. It's my first birthday in New England. Any ideas?

Holy crap I need sleep. I'm going to PA in a week or so I'm kinda really pumped about it....8 hours on a bus...that will be a good rest. I need to get away for a while. Especially since things are going alright now.

Also, you have probably heard this story...The submarine in NYC by the guys in Providence...well one of them, was Mike Bike, I don't know him all that well but I gave him a tattoo once. Just thought I would share this crappy uneventfull video, you may be able to find better footage somewhere else.

But for now I will drink a beer and watch Freaks and Geeks. It makes me feel good inside. It also makes me angry that I hung out with burnouts instead of sci-fi geeks.

I went to the dermatologist today and had a mole removed. He told me it looked like it was melanoma. Melanoma is the worst kind of skin cancer. It is treatable with just surgery if it hasn't gone to deep. Most doctors won't say something like that if it's a low possibility so most likely it is. I'm pretty scared but not to worried right yet. I have to get a tooth pulled tomorrow and 2 cavities filled. (I had 2 done today and then found more later) So I can concentrate on that for now.

But on a lighter note for all of you knitters... 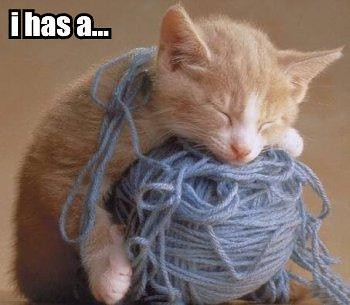 This is an E-mail I recieved about my apartment listing.

I am a college student, no any unacceptable habits. I am interested in your place. Please e-mail me to arrange a time for me to see the place! 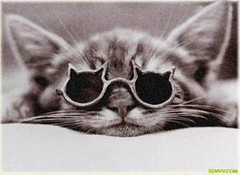 It sucks when you go back home and your friends are all Tools.

I think I don't like over half of my old friends. They are annoying, superficial, opinionated, snobby, jerks who all have fucked up problems and addictions that they won't do anything to fix.

I miss Scuffy and I don't want to hang out with anyone but MattKeane and my parents.

It's also stressful because I don't want to be a jerk, but a big part of me doesn't care because I live so far away and I figure that they can all go fuck themselves.

I have been in Duluth for 24 hours and I'm already bored. I also already ran into people I didn't fell like seeing. Not bad people, just people I have nothing to say to. Its awkward. It's very nice out. Perfect almost. The air quality is amazingly different. It's so fresh and easier to breathe. There is so much green everywhere. Thats one of the only things I miss terribly from here. It's quiet and less populated. But it's uneventfull and I can't ride a bike around. Everytihng smells different. The town has a specific smell that I never realized before. It's probably a mix of being gone for a long time and quitting smoking. My family is endless. A constant flow of surface questions and answers. We don't realy talk about anything important. Part of me likes it that way and part of me is annoyed by it.

On the plus side my friend Matt's parents were pumped to see me and so were his dogs. His mom redid the room that I sleep in. There is noting in there but a bed and a dresser. It used to be a big clutterd mess covered in fur. There is a larger bed! And it has a deck off of it! I thought I would get allergies but it never came. I think I'm more alergic to my house than his with 2 dogs and 3 cats.

Tomorrw is supposed to be 100 degrees. I plan on swimming the whole day long.

Jeremy invited me to go to the Hot Club this afternoon. Normaly that is not entirely my cup of tea but whatever. Outside patio, a couple sodas, and getting my mind off of my dick face roommate who wont vacate the apartment, is not such a bad thing. I rode my bike down there and my friend Grant was working the door. He showd me around and helped me find Jeremy, Sin, and Ed (A new Ed).

We sat and talked for a while then 2 guys came up that Jeremy and Ed know and they asked if they could sit with us. I wasn't to thrilled about it. They were construction workers. Thick New England accented-douchebags. The instantly brought out the testostorone in everyone at the table and put most of us on a slight edge. One of them was more mouthy than the other as it always tends to go and lucky me I got to sit next to that one.

I had a confusing conversation about graffiti with him. I still have no idea weather or not he is against it. They brought up my leg hawk and Sin was very supportive/pumped, they just thought I was "frickin retarded". He asked everyopne if they knew any jokes and there was at least 20 told. I only laughed at one. It was a plethera of Italian, black, Jesus, and young girl jokes. This is the point where I was trying to figure out how I could get up and leave without being rude to Jeremy having only been there for fourty five minutes and barely spoken to each other because of these guys.

The the topic of tattoos came up, Ed said he would like me to do one on him. While Ed was trying to speak to me the mouthy one interruped and told me I need to practice more and that I need to color or draw in black and white more. I was confused as to what he was saying because he wasn't being quite clear as to why he was telling me this. Then he kind of whispered to me " I saw your tattoos and they are shitty" And I replied with a "fuck you, you don't need to talk to me any more" He tried to explain and tell me he was kidding, joking whatever but I just continued to say "don't talk to me". Sin saw that something was going wrong and stood up and asked me to go get something to eat with her. I jumped up said goodbye and left.

Now I know that my tattoos aren't works of art but there mine and I like them. I feel bad that I ran off on Jeremy like that but I feel I had good reason. Sin was trying to blame it on the fact that he was pretty drunk but I frankly don't care either way. I can't stand people like that. I was pretty pumped that I had no one like them in my life at all. It was a slap in the face reminder that I live in a very different world. I surround myself with people who are not ass-holes. I do this unconciously, but I do it none the less. I am proud of the company I keep and I'm damn sure that thats why I dont have much company. I am alright with that.

There are a million ways to be a jerk and I avoid all of them. I think I'm now over being worried what people think of me if I leave because I'm not compatible with the people around me at the given time. I'm not a fighter and I'm not very good with words. Leaving is the most constructive thing I can do.

I went to the beach today. It was actully alright being there alone. The waves were perfect size for me. It was like Thor was throwing his Jacuzzi at me over and over. There was a static in the air and a hum in the sand. There were pretty girls with ignorant boyfriends. An old couple sat next to me with their radio going and a bitterness to the womans speach. I enjoyed the radio as much as her complaints. I had my towel around my head like the stained glass portraits of the Virgin Mary, trying to keep the sun off my already burnt forehead. I forgot my sunscrean but I think I'll be ok. I'm still not used to the costal beaches. There are so many people and It's a different atmosphere all together. I get a little clostrophobic. It's like walking through a 1940's black and white day in the life of an Easterner movie. All the kids running around and screaming, the life guards blowing whistles. and mothers yelling for their children to "stop that!" in between tanning each side so evenly. There are fat men who have been there to long. So long in fact that they are burnt to a crisp before they even wake up. Teenagers are chasing each other, looking at me like I am contaigous because I am there by myself. It's ok though. I would rather be there alone than roasting in my apartment in Providence. There is no ocean brease in town. It's 11pm and its hotter here than it was there at 2. I miss the smells and the felling of water near by. I am longing to be near the woods an a lake. I can't stand being swarmed by cement, buildings, and people. It's not me. It's not natural. I hate realizing that I dont like it here. I hate realizing that there is no other option right now. If I'm not in the city I have to commute. Driving weighs to heavily on my concious. I can't win. I hate it here. I hate it there. I don't even like the ocean that much. I miss the simplicity of the lake.
Collapse